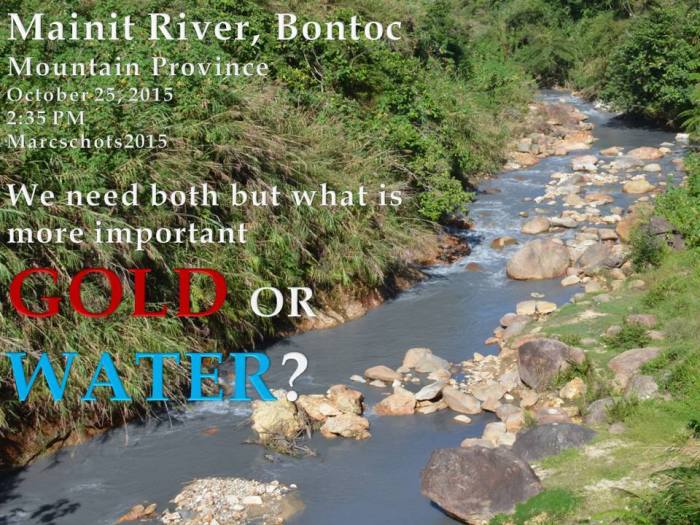 Mining ranks among the world’s most destructive industries. Each year, mining strips some 28 billion tons of material from the earth–more than is moved by the natural erosion of all the earth’s rivers. Worldwide, mining and smelting generate an estimated 2.7 billion tons of processing waste each year, much of it hazardous–dwarfing the quantity of the more familiar municipal waste

Most part of Mountain Province serves as the headwater of major river systems such as Chico and Agno, producing abundant water supply for agriculture, power generation, industrial irrigation and domestic purposes, especially in the lowland communities of Region I, II and parts of Central Luzon where rivers connect.

Gold mining (in-valitok) is a venture that some households in Mainit have increasingly depended on for income. Gold mining consists of sifting for alluvial gold in streams and other waterways, a type that locals refer to as barkis. Gold as a major income source for villagers. In 2014, the Regional Trial Court in Bontoc ordered the close of illegal mining activities in Mainit ‘to prevent untold danger to human lives and irreparable damage to the environment arising from crude, indiscriminate, unsupervised diggings, and the illegal cutting of trees.

According to miningfact.org, the use of water in mining has the potential to affect the quality of surrounding water. Because water is being to use to wash the mineral being extracted. For instance, gold use much more water than non-metal mines such as coal, salt, or gravel mine.

The mineral industry of Philippines comprises two major sectors. First is the large scale corporate sector, which Filipino owned and foreign-controlled companies that undertake huge mechanized industrial operations. Second, is the ‘small scale’ sector, which subsumes scores of thousands of individuals and hundreds of loose miners’ organizations or groups who unfortunately are associated with ‘illegal’ operations.

“There is no mining in Mainit. The ‘ismol-iskeyl’ that we carry out is not considered mining. When you use the word ‘mining’ to refer to what we do here, you are implying that there are full-scale operation in Mainit. That is not the case. We are not doing what large companies are doing,” a statement of a male elder during the validation meeting on March 16, 2015.

The largest mining operation in Mainit which composed of 23 to 33 persons is equipped with a drilling machine and backhoe for excavation, rod and ball mills for ore crushing, and truck for transportation ores from Mainit to sellers outside the village.

In a study titled,” Gold for the Good of the Greater Lot: An Indigenous Notion of and Pursuit for Sustainability “conducted by Minerva Chaloping, gold mining (in-valitok) is a venture that some household in Mainit have increasingly depended on for income.

Many women also explain that gold mining enables them to pay tuition and accommodation of students who pursue tertiary studies in Bontoc or in cities like Baguio. In addition, undertaking important household chores is no longer as strenuous as it was in the past. For example, women ceased from pounding rice manually which takes hours using mortar and pestle; instead, they avail of the paid services of rice mill operators. To a large number of families, cash is obtainable to pay for major expenses such as renovation or expansion of their house.

At present, there are several mine operators in Mainit. A mine operator, indistinguishable from a financer, is an individual who serves as an ‘owner’ of a mine. He has the finances required to open a mine, hire workers, and manages the mine. The villagers consider the minerals in Mainit as ‘owned by the community’.

However, a few mine laborers suggest that in the long term, as mine tunnels deepen, the need for ground support using timber, which entails more trees in the communal forests, would not stop, but will even become more imperative.

In 2013, Northern Philippine Times published an article complaints about environmental deterioration associated with gold mining in Mainit are not limited among the villagers themselves, both residing in the village and those who are outside. Neighboring villages along a major water source for irrigating rice fields downstream, also asserts their opposition to mining activities in Mainit due to the alleged mercury pollution finding its way to Chico River.

In an opinion posted on facebook by Fr. Marcs Castañeda, he described a scenario on one of the many effects of mining in Mainit, Bontoc, and Mountain Province. On October 25, 2015 as he goes home from Mainit where he presided a holy mass, he noticed the very unusual color of the Mainit River, deeply gray color. Fr. Castañeda visited some concerned Guinaang residents and officials to report about the river. From that he came with a conclusion, the river is contaminated by tailings from the mines.

Barangay officials and village elders in Mainit claim that mine operation have not brought major environmental problem in their community. They explain that soil erosion in certain places as well as murky water in some streams result from natural processes.

The sinking rice fields resulted to legal action by a family’s against a number of miners with the court decision drawing widespread approval. This indicates that gold mining, while a profitable provider of income, is not acceptable to all I-Mainit as well as to other Bontok people if the method of mining are bereft of duties of care and prevention.

Recently that barangay of Maligcong prepared a petition early in February 2015 asking government agencies to protect their village’s water shed that are threatened by mining activities in Mainit.

Gold mining continues to play an important role in the lives of the Mainit community. For the sake of current and future generations we need to safeguard the purity and quantity of our water and forest against irresponsible mineral development. Gold cannot be eaten but water is a daily need for survival.#Grazilla P. Manengyao