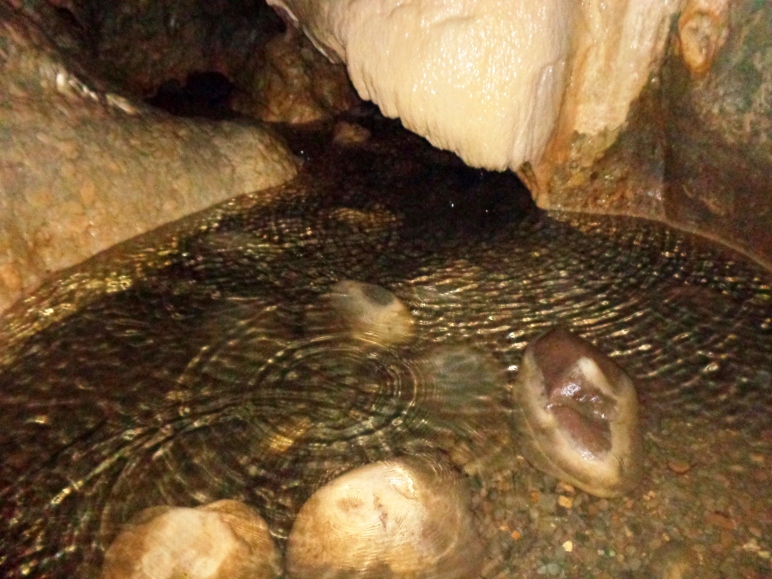 Do you agree that beauty is not seen only on the outside but also on the inside? This is true not just to people but also in nature. Beauty of nature does not end on what we see on its surface. There is also beauty within it such as in Kapangan’s hidden wonders.

Endowed with nature’s generous gifts, Kapangan is full of surprises. It is one of the 13 municipalities of Benguet province in the highlands of Cordillera. Kapangan has numerous wonders. Among these are caves that hide magnificent beauty in the darkness.

Bolinsak cave is one of the hidden beauties of Kapangan. It is a concealed natural attraction found in Taba-ao along the Bolinsak creek. Accordingly, it is 36 kilometers away from La Trinidad and if you walk from the main road, you will reach it after a 100 meter walk.

Due to it being the dwelling place of bulalacao birds which come out and night and make eerie sounds, it came to be known also as Bulalacao cave after the bird.

Glittering and picturesque stalagmites and stalactites which makes the cave even more interesting can be adored inside the cave. There are also crystal clear pools of water inside. Water is constantly dropping from the ceiling of the cave and creates ripples on the water below which only made the pool look more beautiful.

Meanwhile, through the view deck situated beside the entrance of the cave, one can gaze over the appealing countryside and the mountainous surrounding area.

Balabag cave is located at the foot of Mt. Balabag at Beleng-Belis. In order to reach Balabag mummy cave, you must hike for three hours from the Barangay station. Thus you would also enjoy a sightseeing of the places you will pass by as you hike.

The cave has a variety of delightful stalagmite and stalactites which are really breathtaking. Be reminded though that this is a burial cave.

Bolingaongao cave is among the historical sites in Benguet that people love to visit not just for its historical value but also because of its splendor. According to the locals, this cave located in Payyek was used as an evacuation site during the World War I and II. You may feel the eerie aura of someone staring at you veiled in the darkness.

Nevertheless it also showcases a wonderful view of sparkling stalactites and stalagmites that will surely soothe you.

Longog cave is one of the hidden wonders of Kapangan. It is found in Balakbak located at the foot of Mt. Dakiwagan and 14 kilometers away from the municipal hall. On the way to Longog cave you will also pass the mystic Amburayan river and the amkiyet orchid mountain of Cuba.

Merely entering the cave itself is a thrilling experience. You have to pass by a hanging foot bridge which leads to its entrance where near it water oozes out from the rocks. The cave has several entrance and exit points.

In a BSU study by Jovane D. Pastor in 2010 titled ‘‘Potential of Longog Cave as a Tourist Destination Area in Balakbak, Kapangan, Benguet’’ he labeled Longog cave as a tunnel cave, where tourists must swim and even crawl. He also described that inside the cave are unique waterfalls, corals and mineral deposits.

The picturesque views inside the cave are described by many tourist and likewise in Pastor’s study to be magnificent as it includes massive complex of rock pillars and columns which makes the view even more captivating. It also has entrancing stalactites and stalagmites protruding from the floor and the ceiling.

Longog cave is not very large but it is gradually wet and very watery that you have to wear light but protective clothes when you enter it. It also has many labyrinth bobbling with water. Pastor also mentioned that considerable skill at hanging onto rocks is needed.

‘‘Kapangan’s caves are very challenging. I want to visit it again soon,’’ says Maureen Bassit after taking a tour around the municipality’s hidden wonders. Despite the darkness, with the help of flashlights you will realize that Kapangan’s beauty is indeed not just seen on the surface but also in the beauties hidden within its caves. # Victoria Magastino_Envi